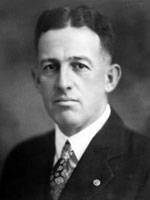 William Judson Holloway was a native of Arkadelphia, Arkansas, born December 15, 1888. His father, a Baptist minister eager that his son secure a good education, sent him to Quachita College. After graduation in 1910, Holloway attended the University of Chicago and then moved to Oklahoma. He lived in Hugo and became principal of the high school while he studied law. He entered the Cumberland University Law School in 1914. Upon completion he began practicing law in Hugo and by 1916 he was elected Choctaw county attorney. Holloway, a Democrat, was State Senator from 1920 to 1926 and served as President Pro Tempore.

Known as a friend of the teaching profession and an advocate of education reform, Holloway became Lieutenant Governor in 1926, and succeeded impeached Governor Henry Johnston in office January 21, 1929. Now the state’s eighth governor his administration did much to quiet political unrest and restore confidence in state government. Even the Ku Klux Klan faded as a political and social power.

Holloway passed legislation redefining age limitations for child labor, and called for a new mining code to require operators to improve health and safety regulations. The large increase of automobiles on the state’s highways set a speed limit to forty-five miles an hour for public safety. Holloway revised the State Highway Commission reducing its membership to three commissioners. An Act created a Temperance Day in public schools to be on the Friday nearest January 16. A joint committee of the legislature
continued to assist in determining the western boundary line of Oklahoma and the eastern boundary line of the Texas Panhandle. A special session of the Twelfth Legislature convened May 16, 1929, and adjourned July 5 to make provision for the state to acquire toll bridges. Probably the most important reform of Holloway’s administration dealt with changing the election laws providing for a runoff primary. Thereafter, a candidate had to have a clear majority for the nomination.

Governor Holloway pledged himself to a strict enforcement of the law, to economy in state government, and to keeping expenditures within the revenue of the state. There was a deficit of approximately $2,000,000, which Holloway said could be cleaned within two years. His goal was to keep biennial expenditures under $30,000,000 and he succeeded until the crash of October, 1929, and the Great Depression which followed changed these plans. The governor extended every effort to keep the state solvent in time of crisis.

Holloway did not serve a second term as governor. He practiced law in Oklahoma City until his death January 28, 1970, and is buried in Rose Hill Cemetery in Oklahoma City.