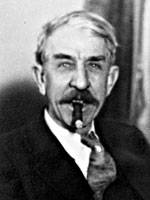 Probably Oklahoma’s most colorful political figure, William Henry Davis Murray, better known as “Alfalfa Bill,” was born November 21, 1869, in Collinsville, Texas. His mother died when he was two years old and once his father remarried, the family moved to Montague, Texas. Murray left home at twelve, but he did attend school at College Hill Institute in Springtown, Texas. At twenty years old he graduated from college and held various jobs including day laborer, teacher, book-seller, and writer for the Forth Worth Gazette. Admitted to the Bar in 1895, he practiced at Fort Worth before moving to Tishomingo, Indian Territory, in 1898. He became legal advisor to Douglas H. Johnston, Governor of the Chickasaw Nation, and whose niece Murray married. His participation in Indian politics and as a member of the Sequoyah Convention made Murray an adept politician by the time of statehood. He served as President of the Oklahoma Constitutional Convention in 1906; Speaker of the House of Representatives, 1907 to 1908; and member of the Sixty-third and Sixty-fourth United States Congresses. Murray led an Oklahoma colony with ranching interests to Bolivia in 1929, but returned to file as Democratic candidate for governor, an office he had sought twice before.

Murray was elected Governor with a record majority of 100,000 votes and served from January 12, 1931 to January 15, 1935. During the early years of the Great Depression, he attacked the $5,000,000 deficit, mass unemployment, mortgage foreclosures, and bank failures. From the Thirteenth Legislature he obtained a $600,000 appropriation to provide emergency commodities. Murray collected money from state employees, businessmen, and even gave much of his own salary (nearly $6,000 over the years) to feed the destitute. No federal relief program had yet been developed and Murray became a leader in developing concern for the victims of the Depression by calling a national council for relief, which met at Memphis in June, 1931.

State government faced bankruptcy not only because of the deficit, but because most taxpayers lacked the means to pay their obligations. The legislature, at Murray’s urging, created the Oklahoma Tax Commission to increase tax revenues by speeding collections. The new agency established safeguards against tax evasion and showed the drainage of taxable wealth from the state.

These were hard times and despite impeachment threats from the Senate, Murray exploited the emergency situation to justify extensive use of the National Guard and martial law. One of his most publicized uses of the National Guard occurred against Texas in the “Toll Bridge War,” July 1931, to reopen an Oklahoma-constructed free bridge across the Red River which had been closed by the Texas Governor.

Murray’s most effective use of military power was applied to restraining oil production. The price of oil had declined to less than fifteen cent a barrel. Heavy production came from the newly opened East Texas field and Oklahoma wells in Seminole and Oklahoma City. Many tanks sat filled with oil, some purchased at $2.50 a barrel. Governors of four states met in Fort Worth and created the Oil States Advisory Committee to control future interstate oil production. Governor Murray ordered a price of $1.00 a barrel, but the oil companies refused to comply. On August 4, 1931, Murray called the National Guard into service, declared martial law, and ordered 3,106 prorated oil wells shut down. Prices went up at once. During his administration he called out the National Guard over twenty times and declared martial law over thirty times.

Additionally, Murray had Motor Fuel taxes and Corporate Income taxes increased. He reorganized the Highway Commission and created the Department of Waterways, Power, and Flood Control to deal with the Dust Bowl. Also, Murray opposed the New Deal program as a whole. In 1932, Governor Murray announced his candidacy for presidency at the Democratic convention in Chicago, but Franklin D. Roosevelt of New York won the nomination.

In later years, Murray remained active in politics, writing articles and books dealing with constitutional rights. On January 9, 1951, Murray administered the oath of office to his son, Johnston Murray, at the inauguration of Oklahoma’s fourteenth governor. Murray died October 15, 1956, and is buried in Tishomingo.