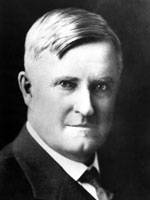 Robert Lee Williams, the third Governor of Oklahoma, was born December 20, 1868, at Brundidge, Alabama. As a young man, Williams earned a number of college degrees, which included the study of the Methodist ministry and became licensed to preach. Admitted to the Alabama Bar, he began his practice in Troy in 1891. He came to Oklahoma in 1893 during the Cherokee Outlet opening and practiced law briefly at Orlando. After a return to Alabama, he came back to Indian Territory and settled at Durant in 1896 where he continued to practice law, taking considerable interest in local politics. In his early years of public service, Williams played a major role in the development of the Democratic Party in eastern Oklahoma and served as a national committeeman from Indian Territory. He was a member of the Oklahoma Constitutional Convention in 1906. When the Oklahoma Supreme Court convened for the first time on November 16, 1907, Williams served as Chief Justice. He was re-elected to that post in 1908 and served for the full term of six years until 1914.

Williams resigned from the court to enter the race for Governor as the Democratic nominee. He was a staunch conservative and a determined administrator with an assertive personality, deep convictions and a high sense of duty. The Republican nominee was John Fields, editor of a farm paper in Oklahoma City. Although Fields carried the farm vote, Williams was elected by a narrow margin and took office on January 11, 1915, serving until January 13, 1919. In 1917, Williams became the first governor to work in the new state capitol building, situated in northeast Oklahoma City.

At the time Oklahoma’s economic situation was poor and Williams emphasized its improvement. For example, taxes were raised while appropriations for all institutions were trimmed in an effort to reduce state indebtedness. He consolidated the sprawling maze of several governing boards, commissions and agencies for state institutions by creating the state Board of Affairs. Williams played a direct role in its administration by making appointments and setting salaries. Through this concentration of power, Williams became one of Oklahoma’s strongest chief executives.

Legislative action and program reform throughout Williams’ administration included: a highway construction act; a state insurance bond; the office of pardon and parole; a state fiscal agency; laws regulating impeachment; a supreme court membership increase from six to nine; an oil and gas division established within Corporation Commission; several provisions designed as aids to agriculture; and the licensing of all private employment agencies. Oklahoma institutional development included the creation of the Union Soldiers’ Home and University Hospital.

Along with these successes, two major developments hung over Williams’ administration. The first was the Supreme Court case of 1915, Guinn v. United States. State election officials in several counties had been indicted, convicted and sentenced by a federal grand jury on charges of violating federal election laws by enforcing Oklahoma’s “grandfather clause”. Upon appeal, the high court declared the “grandfather clause” invalid and a violation of the Fifteenth Amendment to the Constitution of the United States. Williams called the state legislature into special session in 1916 and proposed two methods to determine black suffrage: 1) a customary literacy test for registration for voting or 2) setting an extremely brief registration period for voters not already eligible. The latter obviously included a large number from the black community and became law until 1937.

The year 1916 also brought to Oklahoma and the United States the reality of World War I. This was the second big development in Williams’ administration. For the remainder of his administration, politics and state and local affairs were largely forgotten as Williams energetically mobilized Oklahoma’s resources for the war effort. He mustered troops through local draft boards, encouraged maximum farm production, promoted the saving of food and fuel, held Liberty Bond drives, and mediated between extremists groups such as the Socialists, International Workers of the World (Wobblies) and the American Protective League.

By 1918, the state had elected a new governor and Williams returned to the judicial branch of state government. Appointed by President Woodrow Wilson, Williams spent his later life as United States District Judge for the Eastern District of Oklahoma from 1919 to1937. He also served as United States Circuit Judge, Tenth Circuit, from
1937 to 1939, a position appointed by President Franklin Roosevelt. He retired in 1939 but continued to serve as needed. Williams died at his home in Durant, Oklahoma, April
10, 1948, and is buried in the City Cemetery in Durant.