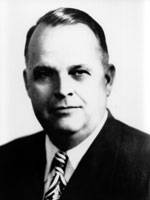 Oklahoma’s first native-born governor, Robert S. Kerr, was born near Ada, Indian Territory on September 11, 1896. He graduated from public school and attended college at East Central Normal School, Oklahoma Baptist University, and the University of Oklahoma. During World War I, he served with the American Expeditionary Force in France for ten months as an artillery officer. Upon his return he became active in the American Legion and in 1925 was elected Commander of the Department of Oklahoma. He practiced law at Ada until 1930, when he moved to Oklahoma City. He became well known in Oklahoma as an attorney and lay leader in the Southern Baptist Convention. Beginning as a drilling contractor in 1926, he built a large oil producing company and at the time of his death was president of the Kerr-McGee Oil Industries, Inc. Success in the oil industry led to Kerr’s election in 1936 to the presidency of the Mid-Continent Oil and Gas Association, Kansas-Oklahoma Division. His personal wealth at 1942 was estimated at $10,000,000.

Kerr was an energetic worker in the Oklahoma Democratic Party. Although not a candidate for elective office before 1942 he already had served several years as a Democratic national committeeman, held an appointment as special justice on the State Supreme Court in 1931, and was a member of Governor Marland’s unofficial Pardon and Parole Board. He was elected Governor on the Democratic ticket serving from January 13, 1943 to January 13, 1947.

Governor Kerr’s program for the Legislature included mobilizing Oklahoma’s resources for World War II, extending the free textbook program, assuring a full nine-month term for public schools, study be given to the need of a short ballot, and an aggressive industrial recruitment program to diversify the Oklahoma economy.

When Kerr took office, a major problem was the $37,000,000 state debt. However, the war boom and general prosperity, plus increased levies on income and gasoline, soon swelled state revenues. The governor emphasized that failure to achieve solvent state finances would be a deterrent to attracting new industries in the state. Accordingly, he suggested that the way relieve state debt was to commit the surplus revenue to a sinking fund which would retire bonded indebtedness. The plan worked and when Kerr left office in 1947, Oklahoma was debt free.

Anxious to reform the management of Oklahoma’s system of higher education, Kerr recommended that the boards of regents for the University of Oklahoma and the Agricultural colleges be made constitutional instead of statutory bodies. He recommended that the regents be removed from politics by extending regents’ terms to seven years and allowing dismissal of members only for “cause.” Voters approved these changes as well as resumption of the run-off primary system. Through a series of legislative acts and voter-approved referenda, Kerr achieved his goal of improved school financing. Per capital aid was set at a $2 minimum and the maximum ad valorem levy was raised from ten to fifteen mills in all districts voting for the higher tax. A special levy was passed to upgrade Negro schools. Furthermore, a free textbook amendment was added to the state constitution in 1946.

The Planning and Resources Board was established consisting of fifteen appointed members. Emphasis was placed upon collecting information regarding industrial possibilities of the state. In order to meet postwar needs, the Legislature created a department within the Board, known as the State Postwar Planning Commission.

The Kerr administration created an official Pardon and Parole Board whose members considered applications for commutations of sentences, pardons and paroles; it required that the governor report all acts of clemency to the Legislature. The Legislature enacted the community property tax law, which allows a husband and wife to divide their earnings equally and to pay income taxes separately. This reduced surtax payments, particularly for those in the higher income brackets. In 1947, eight other states had this law. Governor Kerr made acceptance of the law in Oklahoma one of his principal aims.

After serving his term as governor, Kerr entered the presidential election of 1952 as a candidate for the Democratic nomination. However, the Governor of Illinois, Adlai Stevenson, was selected by the National Democratic Convention. Kerr served as U.S. Senator from November 2, 1948, and until his death on January 1, 1963. During his tenure as U.S. Senator, he worked to get the McClellan-Kerr Arkansas River Navigation System developed, changing much of Oklahoma’s landscape. Kerr is buried at his birthplace near Ada.