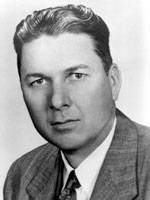 Raymond D. Gary was the first Governor born in Oklahoma since statehood. Born January 21, 1908 on a farm midway between Madill and Kingston, he graduated from Madill High School and Southeastern State College in Durant. After five years of teaching he was elected County Superintendent of Marshall County schools in 1932, serving four years. In 1936, he entered business and later became President of the Sooner Oil Company. Gary served as state Senator for fourteen years beginning in 1941 and acted as President Pro Tempore of the Senate of the Twenty-fourth Legislature until he won as Democratic candidate for Governor. Gary served from January 10, 1955 to 1959.

Governor Gary’s legislative program featured conservative government aimed at economy and efficiency. He opposed a tax increase, pointing to the state’s need to live within its current means. The legislature increased appropriations to public schools and institutions of higher learning. Fifteen million dollars was set aside for additional campus buildings. Appropriation increases were also made for welfare programs, notably old age assistance, and for mental health programs, notably hospital care and rehabilitation.

Governor Gary considered his handling of the desegregation of public schools as his number one achievement during his term. Desegregating educational facilities in Oklahoma first began in graduate colleges as a result of the Sipuel and McLaurin cases. This enabled some preparation for the U.S. Supreme Court’s revolutionary decision in Brown v. Board of Education in 1954. The State Board of Regents announced in 1955 that “qualified Negroes would be received by all schools, colleges and educational facilities.” Attorney General Mac Q. Williamson and other state officials took the lead in Governor Gary’s administration to integrate public schools.

Governor Gary immediately met with the State Superintendent of Education, the Chancellor of Higher Education and Representatives of the Oklahoma Education Association. The Governor pointed out to the legislature that the first step toward compliance with the integration order was to end the separate financing of schools. He expressed the fear that railroads, power companies, and other business enterprises paying substantial annual sums for the support of schools might object in the courts and cripple the school finance system. The Governor submitted a constitutional amendment, known at the Better School Amendment, to consolidate school finances by ending separate levies in the counties. The amendment provided for an additional four mill levy to constitute the loss of separate black school financing. The legislature passed the amendment overwhelmingly. The Governor signed the proclamation on March 9, 1955 and set April 5 for special election. The legislature recessed on March 30 and members traveled the state explaining and promoting the amendment while attempting to convince voters to accept peacefully a basic change in society using the slogan SOS (Support Our Schools). The campaign succeeded by a vote of 231,097 to 73,021.

The amendment’s effect was not immediate because it did not specifically desegregate public schools. However, it made integration financially possible when the final decree came from the U.S. Supreme Court in May 1955. Governor Gary advised each school district that it would not receive state aid if it defied federal law. Prompt compliance, firm leadership from legislators, and restraint by public officials, kept the integration process smooth. No organized opposition to desegregation developed in Oklahoma. The Governor received fewer than two dozen letters critical of his action. Most were unsigned from outside the state.

Governor Gary and his administration led in other areas of desegregation as well. At the State Capitol Building, separate washrooms, drinking fountains, and other reminders of “separate but equal” were removed. The Oklahoma National Guard became integrated. The Governor refused to attend any conference or meeting in the state held in a hotel or resort that practiced discrimination.

In following years, the Governor and the legislature focused on the 1957 Oklahoma Semi-Centennial Celebration. The legislature passed a Corrupt Practices Act which set new limits on campaign expenditures. In the primary race a candidate for Governor or Senator was limited to $60,000 and allowed an additional $30,000 for the general election. The legislature consented to creating a system of personnel management for state employees and a new State Department of Commerce and Highway.

Governor Gary advocated conservation through the organization of a statewide authority to survey, plan, and develop water sources and needs, which resulted in the Water Study Commission. Gary asked for appropriations to finance studies of stream flood control projects leading to the construction of additional check dams. The lakes created supplied water for irrigation, cities and industrial uses. His plan provided for financing the dams through self-liquidating bond issues. Cities and towns combined their resources through the organization of water conservancy districts. They could enter into long range contracts to develop water facilities by issuing thirty-year bonds to be retired from water sales according to voter approval of State Question No. 380 of July 1, 1958.

Governor Gary also urged the creation of a new Department of Commerce and Industry. This agency advertised Oklahoma’s industrial potential around the nation and accelerated the relocation of job-supplying enterprises in the state. The Governor worked hard at trying to balance the state’s agricultural economy with a future in industry by offering businesses low tax rates, local inducements, and growing water resources.

Raymond Gary ran again for Governor in 1962, but did not win the primary election. He campaigned for United State Senate in the 1964 election, contesting current U.S. Senator J. Howard Edmondson. Raymond D. Gary died December 11, 1993 and is buried in Madill.