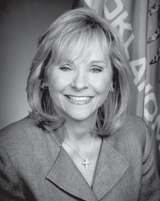 Governor Mary Fallin was elected November 2, 2010, during a historic election in which she became the first-ever female governor of Oklahoma. She was inaugurated on the steps of the Oklahoma Capitol as the state’s twenty-seventh governor on January 10, 2011.

After a successful career in the private sector as a manager for a national hotel chain, Fallin made her first foray into public service in 1990 when she was elected to the Oklahoma House of Representatives. This began her long and distinguished career of public service dedicated to conservative, commonsense solutions to the challenges facing Oklahoma families and small businesses.

During her time in the House, Fallin earned a reputation as a consensus builder who was willing to reach across the aisle. Serving in the Republican minority, she managed to pass more than a dozen bills that were signed into law by the state’s Democratic governor, including Oklahoma’s first “anti-stalker law,” and measures aimed at improving the business climate in Oklahoma. She also worked to lower the health care costs of small businesses in Oklahoma and for her work in this area was honored as a “Legislator of the Year” by the American Legislative Exchange Council.

In 1994 Fallin would first make history by becoming the first woman and first Republican to be elected lieutenant governor of Oklahoma, an office she would hold for twelve years. In this capacity, Fallin focused her attention on issues affecting job creation and economic development. She served on ten boards or commissions involving business and quality-of-life issues in Oklahoma. In 1997 she chaired the Fallin Commission on Workers’ Compensation, which released a comprehensive reform plan to lower costs of workers’ compensation while creating a system that was fair to both businesses and workers. Fallin also used her position as president of the Oklahoma State Senate to allow the citizens of Oklahoma to vote on “Right to Work,” which ended the practice of compelling workers to join and pay dues to a union. In 2001 Oklahoma became the first state in the country to pass such a law in more than twenty-five years.

Fallin was elected to the U.S. Congress in 2006 where she represented the Fifth District of Oklahoma. In Congress, Fallin served on the committees for small business, transportation, and infrastructure, natural resources and armed services. Fallin coauthored numerous pieces of legislation to lower taxes, reduce regulation on businesses and individuals, fight federal overreach, increase American energy production, create jobs and protect constitutional liberties.

As governor, Fallin has listed as her priorities job growth and retention, government mod- ernization and streamlining, education reform and protecting Oklahoma from the intrusions of Washington, D.C.

Fallin is married to Wade Christensen, an Oklahoma City attorney who is the state’s first “First Gentleman.” The couple have six children between them. They attend Crossings Community Church in northwest Oklahoma City.