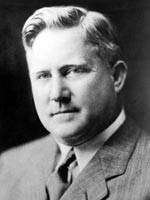 Trapp was born in Robinson, Kansas, April 18, 1877. When Trapp was twelve years old his father participated in the Oklahoma Land Run of April 22, 1889 and moved the family to a claim seven miles west of Guthrie. Trapp secured a good education, took a job with a local newspaper, and began teaching at 21 years. Later, he worked as a traveling salesman. His political career began in 1904 when he ran on the Democratic ticket and was elected county clerk for Logan County, serving from 1905 to 1907. He served at State Auditor from 1907 to 1911, and then he entered the bond business and settled in Muskogee in 1913. Trapp was chosen as lieutenant governor in 1914 and reelected to the office in 1918 and 1922. He served as lieutenant governor during the administrations of both Governor Williams and Governor Robertson before his third term under Governor Walton.

Governor Trapp provided a quiet and conservative leadership. He curbed the extravagance of state government and attempted to provide a more honest and efficient state government. Almost immediately, he called the legislature into special session to investigate certain officials and departments; removing state officials whose services were of little value and providing reorganization of state government. He gained repeal of $10,000,000 of Walton’s planned expenditures, restoring the credit of the state. Governor Trapp repealed the free textbook program and repealed a one-third reduction in school aid appropriation. With an increased three-cent gasoline tax, Trapp established the Highway Commission as well as carried out a vast highway construction program. He managed public finances so carefully that he left office with a $2,000,000 surplus in the state treasury.

In addition, Governor Trapp’s interest in the environment and conservation led to the establishment of a Forestry Commission, a Conservation Commission, and a Fish and Game Commission. He also extended terms to four years for county officers, enacted a state drainage law for flood prevention districts, increased the costs of licenses, created the Bureau of Criminal Identification, and promoted legislation to improve enforcement of prohibition. Trapp also promoted the passage of an anti-mask law, which eventually reduced the power of the Ku Klux Klan.

Trapp stubbornly refused to acknowledge that his tenure as governor was any more than that of “acting” governor, and when the election of 1926 approached, he sought to officially run. Trapp had been a conservative, capable administrator with widespread popularity, and his chances of winning the nomination appeared good.

However, a constitutional provision stated that a governor could not succeed himself. Trapp asserted that this provision did not apply in his case since he had been elected as lieutenant governor and succeeded to his position as chief executive only upon the impeachment and removal of Governor Walton. To clarify his status, the State Supreme Court investigated the matter and in the case, Fitzpatrick v. McAlister, the court ruled that Trapp had been governor in fact and that the constitutional limitation applied.

Trapp continued a career in politics, and attempted to run for governor in 1930, but was not nominated. He was a dealer in investment securities until his death on July 26, 1951 in Oklahoma City. Trapp is buried in Fairlawn Cemetery in Oklahoma City.