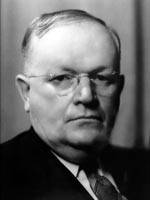 Leon Chase Phillips, Oklahoma’s eleventh governor, was born December 9, 1890, in Worth County, Missouri. His family moved to a claim in western Oklahoma where he attended a country school and graduated from high-school. He taught for a while, and then entered Epworth University in Oklahoma City, intending to study for the ministry, but changed to law and received his LL.B. from the University of Oklahoma in 1916. He became known as “Red” among the members of the football team on which he played. He was admitted to the State Bar that year and practiced before the United States Supreme Court. After service in World War I, he returned to Okemah to practice law. In 1932, Phillips was elected a member of the House of Representatives of the Fourteenth Legislature. Re-elected in 1934, he was chosen Speaker of the House; he was re-elected to the House again in 1936, but was defeated for the office of speaker. Phillips became governor on the Democrat ticket on January 9, 1939 and served until January 11, 1943.

Governor Phillips made many recommendations to the Legislature. For example, he urged a balanced budget, repeal of the port of entry law, the construction of farm-to- market roads, and correction of heavy tax burdens. Despite his anti-New Deal sentiment, he recommended co-operation with the Federal government for further relief of farmers, laborers, and business institutions. A general revision of many boards and commissions was recommended. Phillips was pledged to economy.

The depression years had been almost as difficult a period for the state as for many of its citizens. In January, 1931, the state deficit was $5,737,887; in January, 1939, it was $25,731,000. The task of deficit reduction was the goal for the Legislature. Forty laws pertaining to taxes and the Tax Commission were passed. The inheritance and sales taxes were re-enacted and a four-cent tax levied on gasoline. The tax on cigarettes was raised from three to five cents per package. Provision was made for the payment of delinquent ad valorem taxes in installments without penalties, provided current taxes were paid in full. The new governor received authorization from the Legislature to issue bonds in the sum of $35,000,000. The bonds relieved the state debt, and provided a small surplus to assure a balanced budget. To insure against a recurrence of state deficits, Phillips proposed a budget balancing amendment to the constitution, which passed.

Phillips’ declared plan to cut appropriations to reduce the state indebtedness hit state institutions and education. The Legislature slashed institutional and educational appropriations twenty percent. However, a common school aid bill of $11,500,000 was passed providing funds for schools that had long needed more financial aid. Financial aid would provide a full term of nine months for each school district and congress passed revision of the textbook law.

The Legislature approved the reorganization of the Grand River Dam Authority, providing for five members to be appointed by the governor. Yet, to balance the budget, the Phillips’ administration battled against the construction of multiple purpose dams on Oklahoma’s waterways. He called out the National Guard to prevent completion of the Grand River Dam project, but was thwarted by a federal court injunction. The Legislature also cleared the way for a constitutional amendment permitting women to become candidates for governor and other elective offices. Voters approved the amendment by a large majority. A new highway commission of three members replaced the four-member commission.

Leon Phillips lived in Okemah until his death March 27, 1958, and is buried in Weleetka.