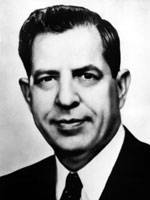 Oklahoma’s fourteenth governor, Johnston Murray, was born in Emet, Indian Territory on July 21, 1902, in the mansion of the Chickasaw Nation’s Governor, Douglas H. Johnston. His early education was governed by the work location of his famous father, William “Alfalfa Bill” Murray, Oklahoma’s ninth governor. He attended public schools in Oklahoma and in Washington D.C., and graduated from Murray State School of Agriculture in 1924. He accompanied his father on a colonizing expedition to Bolivia where he lived for four years trying to make a success of the colony. He returned to Oklahoma and engaged in business ventures in the newspaper, cattle and oil industries. Murray graduated from Oklahoma City Law School in 1946. His political experience included service in county positions, chairman of the State Election Board in 1941, secretary of the School Land Commission in 1948, and Democratic County Chairman of Oklahoma County.

In 1950, Murray announced his candidacy for governor in the Democratic ticket. During the campaign, he emphasized that he was “just plain folks” and utilized the popularity of his family name by referring to himself as “old Bill’s boy”. He was declared winner by a small margin after a bitter contest resulting in a vote re-count. “Alfalfa Bill” administered the oath of office to his son January 9, 1951.

Johnston Murray served as Oklahoma’s governor until January 1955. His program for the legislature stressed economy, no new taxes, and continuation of the program to recruit industry for Oklahoma. This proposal economized welfare expenditures by reducing the number of recipients from nine percent of the state’s population to slightly over seven percent base on closer scrutiny of qualifications. In accordance with Murray’s program, the legislature defeated a proposal to increase the state sales tax by three percent.

Perhaps the most controversial act passed during the Murray administration occurred in 1951 when elected officials and employees of state and local governmental institutions became required to take an oath of allegiance to the state and to the nation. Several faculty members of state colleges and universities were dismissed when they refused to sign the loyalty oath in compliance with the statute. Their objections were upheld by the Supreme Court of the United States in 1953 when the Court held the act to be unconstitutional.

In 1952, a proposed constitutional amendment permitting women to serve on juries was submitted to the people. This was approved by Oklahoma voters; however, two other questions, eighteen year old suffrage and a veteran’s bonus proposal, were defeated in the November general election.

Murray established the Governor’s Joint Committee on Reorganization of State Government and commissioned a “Broom Brigade to sweep the statehouse clean” of unnecessary personnel. The committee consisted of house and senate members and private citizens and operated only as an advisory group.

In 1954, Governor Murray blamed legislative leadership for one of the longest sessions in history. The Twenty-fourth Legislature granted large appropriations for schools, roads, and mental hospitals. Much of the legislative program was opposed by the governor with the exception of consolidation of schools to improve instruction and revised ad valorem assessments to return a major part of school financing to local districts as well as increased appropriations for the state’s mental health program. This enabled the hospitals to expand staffs and upgrade rehabilitation of patients. Otherwise, Murray vetoed a dozen bills slicing several million dollars from legislative appropriations, including $500,000 intended for college and university buildings. These economic measures were offset somewhat by his approval of the purchase of Turner Falls as a state park for the sum of $100,000. Additionally, the expansion of Oklahoma Turnpike Authority functions made possible the construction of the Will Rogers Turnpike, a toll highway nearly ninety miles long connecting Tulsa and Joplin, Missouri. Governor Murray vetoed some forty bills establishing a new record for a governor.

Shortly after Murray’s term as governor and unfavorable publicity surrounded him after his divorce, he faded from the political scene until an article attributed to Murray entitled “Oklahoma Is In a Mess” appeared in the Saturday Evening Post in 1955. It caused a fury among Oklahomans. The new governor, Raymond Gary, publicly denounced the articles through a written rebuttal appearing in the same magazine. Due to this and many other problems such as financial reverses, Murray left the state traveling first to Texas, eventually Mexico, and then on to Argentina. In 1962 Murray returned to Oklahoma and announced his candidacy for the office of state treasurer. He failed to make the runoff. He served as an attorney with the State Department of Welfare until his death April 16, 1974. Johnston Murray is buried at Tishomingo beside with his father.