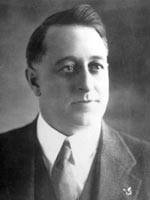 John C. “Jack” Walton was born in Indianapolis, Indiana on March 6, 1881 and lived ten years of his youth in Lincoln, Nebraska. Walton joined the army in 1897, and although he saw no foreign service during the Spanish-American War, he lived in Mexico for some time. He then traveled to Oklahoma Territory in 1903 to work as a contractor and civil engineer. His political career began in 1917 when selected as Public Works Commissioner of Oklahoma City and later served as city Mayor from 1919 to 1923. Walton entered the Governor’s race in 1922 as the Democratic nominee. As Oklahoma’s fifth governor, Walton served the shortest term, from January 9 to November 19, 1923. His platform speeches, campaign and inaugural ball were some of the liveliest and most colorful events in the state’s history.

Although Walton represented the more radical elements of the Democratic Party, the legislature agreed with much of his Reconstruction League program and proved to be one of the most progressive legislatures. Reforms included an expanded farm cooperative program, revision of the Workman’s Compensation Law for improved benefits, stronger warehouse inspection laws to satisfy wheat and cotton farmers, the state’s first free textbook law, aid for weak schools in the amount of $1,000,000, stricter penalties for violating state banking laws, welfare legislation strengthened, and a cotton grader and assistants under control of the Board of Agriculture.

Walton’s problems began when he fluctuated between the League advisors and the conservatives in the legislature. His attempts to appease one group alienated the other and vice-versa until both withdrew their support. To earn patronage from conflicting factions, he made appointments to positions in state government and higher education. For example at the University of Oklahoma, Walton sought gubernatorial favors from the Board of Regents, the president and faculty. Walton sought to reorganize the institution on a political basis and pressured University President, Stratton D. Brooks, to resign. At the A & M College at Stillwater, Walton managed the resignation of President J. B. Eskridge. With military guard, Walton appointed to the position George Wilson, president of the Farm Labor Reconstruction League and one of Walton’s advisors.

Ku Klux Klan activity excessively increased during Walton’s term. He asserted that hostility towards him stemmed from the KKK. In fact, Walton placed Okmulgee County under martial law and Tulsa County likewise with the additional penalty of suspension of habeas corpus; the latter step forbade by state constitution. When an Oklahoma City grand jury prepared to investigate the governor’s office, Walton put the entire state under martial law on September 15, 1923 with “absolute martial law” applicable to the capital. Impeachment demands were rampant and legislative leaders responded with a call for special session. A petition was circulated, adopted and passed on October 2, which allowed the legislature to assemble on its own motion.

In an attempt to override the legislature Walton called a special session on October 11 to enact measurements against the Klan. The legislature refused the governor’s request and recessed until October 17 when they met in reply to the call of Speaker of the House, W. D. McBee. The house developed twenty-two charges against Walton and voted for impeachment. On October 23, Walton was suspended and Lieutenant Governor Martin E. Trapp became active governor. Tulsa house member Wesley E. Disney led the prosecution against Walton in the senate, which was presided over by the Chief Justice of the State Supreme Court. Eleven charges were sustained, including “illegal collection of campaign funds, padding the public payroll, suspension of habeas corpus, excessive use of the pardon power, and general incompetence.” On November 19, 1923 Walton was convicted and removed permanently from office. The bitter factionalism that developed during Walton’s administration would remain a vivid memory for future gubernatorial administrations.

In the 1924 election Robert L. Owen, senatorial incumbent since statehood, retired and Walton won the Democratic nomination for U. S. senator. The abnormality of Walton’s nomination, following so closely after his impeachment, is partly explained because he was the only candidate who publicly condemned the KKK. Although, Walton lost, he later served in the State Corporation Commission from 1933 until 1939, when he retired to enter private law practice. He ran as Democratic gubernatorial candidate again in 1934 to replace William “Alfalfa Bill” Murray and again 1938 to replace Ernest W. Marland, but was unsuccessful in both attempts. He died November 25, 1949, and is buried in Rose Hill Cemetery in Oklahoma City.