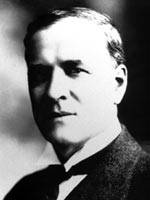 The fourth governor of Oklahoma, James Brooks Ayers Robertson, was born in Keokuk County, Iowa on March 15, 1871, and raised in Kansas. In 1893, he moved to Chandler, Oklahoma Territory, where he taught school and practiced law. Beginning in 1900, when he became Lincoln County attorney, Robertson began climbing the political ladder, culminating to his election for governor in 1918.

Having defeated Alfalfa “Bill” Murray for the Democratic nomination, Robertson faced only pro forma opposition in the gubernatorial race, particularly because the Green Corn Rebellion and their lack of patriotic fervor discredited the Socialists during the world war. As expected Robertson defeated the Republican, Horace McKeever, and the Socialist, Patrick Nagle. He entered office in a Democratic landslide which saw his party win large majorities in both houses of the legislature.

There were major successes during Robertson’s term. With his encouragement, the people of Oklahoma ratified both the prohibition and female suffrage amendments (Eighteenth and Nineteenth respectively) to the national Constitution. The office of the Commissioner of Pensions was created. Another success of the Robertson administration was the development of cooperative marketing agencies for the state’s hard hit farmers. And more roads were paved, 1,300 miles in all, during Robertson’s term than had been paved during all preceding administrations. Another success of Robertson’s administration was the resolution of the Oklahoma and Texas Red River boundary dispute over oil rights, even though the decision was not in Oklahoma’s favor.

Robertson worked diligently, with some success, to upgrade the state’s educational system. The control of colleges by the State Board of Education was abolished. It was decided that institutes of higher learning were to be governed by separate boards of regents. Several institutions of higher education were improved when normal schools became teachers colleges. Robertson willingly spent money for improvement in certification of teachers, upgrading curricula, consolidation of rural schools, and a subsidized textbook program. He attempted to increase funds for those schools with apparent deficiencies. A school of mines was established at Miami, and the preparatory school at Claremore became the Oklahoma Military Academy.

Unfortunately, successes were overshadowed by failures. Although his roads program was good, it was still short of what was needed. Robertson was unable to convince voters to approve the $50 million necessary for highway construction. More damaging was the Recession of 1920 and collapse of the Bank Guaranty System, which resulted in the collapse of many state banks. Another problem was the coal miners’ strike of 1919, which led him to impose martial law in eastern portions of the state. Railroad, building trades and manufacturing strikes followed. The Tulsa Race Massacre occurred on May 31, 1921. Only martial law and the National Guard restored order, and the riot promoted Oklahoma’s nativism, fear of the radical left, and allowed the growth of the Ku Klux Klan.

Compounding Robertson’s problems was the repudiation of the Democrats in the election of 1920. The Republicans won nationally, and they also seized control of the State House of Representatives. The legislature was split, and Robertson was hamstrung for the second half of his term.

Political scandals in the administration of the federal funds led the Republican controlled House of Representatives to investigate Robertson and other Democratic officials. Not only did the House impeach Lt. Gov. Martin E. Trapp, they came within one vote of impeaching the governor. During the financial crisis of 1921 the House adjourned without completing action on appropriations. Robertson had to operate the government by deficiency appropriation until he could force a special session. Another difficulty was the anti-Robertson campaign waged by Campbell Russell, corporation commissioner and newspaper editor. His effort exposed what the Republicans regarded as a scandal in Robertson’s handling of pardons and paroles.

On January 8, 1923, Robertson left office. Robertson died in Oklahoma City on March 7, 1938. He was buried in his old hometown, Chandler, Oklahoma.