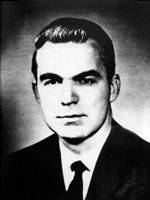 At age thirty-three, J. Howard Edmondson became the youngest Governor in the history of Oklahoma. Born in Muskogee on September 27, 1925, Edmondson graduated from Muskogee High School then enrolled in the University of Oklahoma. He enlisted in the U.S. Air Force in March 1942, serving until December 5, 1945. Edmondson completed his law degree in August 1948 and practiced for a short time in Muskogee. He moved to Tulsa in 1953 to become the Chief Prosecutor in the office of the County Attorney of Tulsa County. He became County Attorney in 1954 and was re-elected in 1956. Edmondson won the race for Governor as Democratic candidate. He was not an early favorite during the campaign, but his commanding television image and ability as a public speaker soon won him a following. The emphasis of the Edmondson campaign, and later administration, was youth and reform; the “fresh breeze.” His young administrative advisers, including Lieutenant Governor George Nigh, became known as the “crew cuts.” Inaugurated on January 8, 1959, Edmondson was elected by the largest majority ever given a gubernatorial candidate in the state.

The first and most controversial issue of the Edmondson administration was the proposal repealing the prohibition amendment to the state constitution. The seventh vote since statehood, the “drys” successfully defeated these measures. With the rising costs of government, pressure for additional revenue, and reluctance to increase the state sales and income taxes, “wets” claimed that Oklahoma bootleggers did a $100,000,000 a year business. They stressed the benefits if the taxes from liquor sales went to the state. Estimates on the profits to be made by the state ran as high as $27,000,000 annually.

On April 7, 1959, Oklahomans voted on State Question 386, a legislative referendum to repeal prohibition. The question carried, establishing the Alcoholic Beverage Control Board and the authorization of licenses to privately owned package stores as liquor outlets. Implemented through the Liquor Control Act, legal liquor sales began on September 1, 1959. Revenue from this source did not meet expectations.

The Edmondson administration provided for a state withholding tax to increase efficiency in revenue collection. A merit system was created to place ability above politics in filling state jobs; decreasing election time turnover and giving a sense of security to state employees. Central purchasing, a controversial practice at first since one agency does purchasing for the state, was a product of Governor Edmondson. He claimed an annual saving of $8,000,000. Chances for new industries were boosted by reducing the workman’s compensation rate 5.3 percent. The Governor encouraged intensive public construction, producing an all time high in nonagricultural employment. He built 2,000 miles of interstate highway and began construction on a southwestern turnpike. Beautification of the Capitol complex began with the addition of two office buildings.

The legislature submitted two propositions for referendum consideration. State Question 393 provided for a $35,500,000 bond issue for state institutional buildings with $5,000,000 earmarked for a new school at Tulsa for the mentally ill. State Question 391 established the State Industrial Finance Authority, which was authorized to issue bonds to the amount of $10,000,000 for loans to local agencies for industrial development. Both State Questions were approved by voters in July 1960.

The Edmondson administration sought to penal reforms, accrediting and expanding the state training school for boys, and construction of a prison honor farm. The Markham Ferry Project focused on conservation of water resources. Construction began on the Hissom Home near Sand Springs, contributing to the mental health field. A $30,000,000 higher education building bond issue provided for needed expansion at state colleges such as a new Center for Continuing Education at the University of Oklahoma.

Governor Edmondson took three major initiative petitions to voters considered in a September 1960 special election. State Question 396 proposed to establish a Highway Commission as a result of too much political influence in Highway Department operations. State Question 397 called for a reapportionment of the legislature. As a result of Oklahoma’s population shifts from farms to cities, urban areas with the majority of the population had a minority of the representation. State Question 398 called for a county option system for use of state road funds. Each county would decide whether to submit money for county roads to the Highway Commission. County Commissioners faced a reduction of spending powers, loosing approximately $30,000,000 normally submitted to the Highway Department. Small towns, rural interests, the “old guard” legislators and county commissioners spearheaded opposition successfully defeating the proposal.

A legacy of the Edmondson administration was a split in the Democratic Party. When the Governor left office, political analysts rated him as the most controversial Governor since William “Alfalfa Bill” Murray. How much blame should be placed on Edmondson is controversial, but some of his measures and actions encouraged differences of opinion. The “old guard” did not accept the Governor’s reforms. The three initiative petitions alienated the rural interests. Many church groups and “drys” were irritated by the repeal of prohibition. Edmondson’s support of John F. Kennedy during the Presidential campaign was unpopular with many Oklahomans. The Governor seconded Kennedy’s nomination at the 1960 Democratic National Convention, however, the state voted for Republican candidate Richard M. Nixon. These conflicts within the party may have contributed to the Republican victories in subsequent elections.

Another legacy of the Edmondson administration was the state’s financial crisis. Despite limited state revenues and expanding needs of state operations, few politicians would increase taxes, arguing it would discourage Oklahoma’s industrial growth. The legislature increased state bond issues, used “legal loopholes” and “raiding”, installed a tax equalization program shifting the revenue-raising load more to the local level, and then turned to the anticipated surplus. The Emergency Appropriation Fund of 1947, authorized that any surplus in the general revenue fund over regular appropriations be transferred to the emergency fund. Beginning in 1961, the legislature appropriated the anticipated surplus. The legislature made open end appropriations on a contingency basis; designated agencies would receive additional funds when money accumulated. However, the state’s money problems went unresolved.

In 1963, during the last month of Edmondson’s term, U.S. Senator Robert S. Kerr died. The Governor had the power to fill a vacancy until the next general election. With only nine days remaining as governor, Edmondson resigned. Lieutenant Governor George Nigh served from January 6 until January 14, 1963, when Henry Bellmon assumed office. Governor Nigh, as expected, appointed Edmondson as U.S. Senator, serving into 1966. At the time of his death on November 17, 1971, Edmondson was a practicing attorney in Oklahoma City, where he is buried.