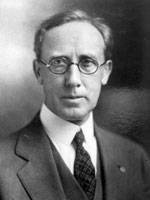 Henry S. Johnston, the seventh governor of Oklahoma, was born in a log cabin near Evansville, Indiana, on December 30, 1867. When only twenty-four years of age he migrated to Colorado, where he studied law and was admitted to the bar in 1891. A few years later he came to Perry, Oklahoma Territory, where he practiced law, and in 1906 was elected to membership in the Constitutional Convention where he served as temporarily as presiding officer. He was also chosen a member of Oklahoma’s First Legislature, and served as president pro tempore of the Senate. He was prominent in Masonic circles and served as Grand Master of the Masonic Lodge of Oklahoma. He was a favorite among prohibitionists and Protestant churchmen.

Governor Johnston entered his term as governor on January 10, 1927 with every prospect for a successful administration. As governor the legislature approved such proposals as the establishment of a crippled children’s hospital and increased the school aid appropriation to $1,500,000 annually, “the highest public school subsidy in state history to the time.” However, before the legislature adjourned complaints were launched against the governor’s confidential secretary, Mrs. O. O. Hammonds. It was alleged that she had too much influence over Johnston’s actions and policies, such as making executive decisions and controlling appointments, and it was demanded that she be discharged. The accusation was but a step from charging the governor with neglecting his duties. Additionally, criticism came when the governor proposed to change the State Highway Commission from three to five members as well as the commission’s newfound preference of using asphalt over concrete for paving state roads.

Before 1927 came to an end House and Senate leaders were determined to discredit Governor Johnston even planned to meet under special session under authority of the newly adopted initiative proposition, a measure passed in 1923 to consider Governor Walton’s impeachment charge. The declared purpose was to investigate the governor. However, the State Supreme Court ruled the initiative proposition unconstitutional, which meant that the legislature could only meet at regular session or when called by the governor. In addition a district court in Oklahoma City issued an injunction. Legislative leaders ignored both the court ruling and the injunction, and proceeded to the state capitol only to be turned away by National Guard troops there on Johnston’s orders. The legislature then convened at the Huckins Hotel in downtown Oklahoma City on December 13 where the Senate, acting as a court of impeachment, agreed upon charges against the governor as well as members of his administration. However, with the realization that the courts were on the governor’s side and concerned over the legality of their meeting, the Senate later turned down the charges and the legislature adjourned. Johnston was vindicated and praised for his restraint in using the courts rather than martial law.

Johnston could have served out his term without additional legislative harassment, but his political doom was sealed with the presidential election of 1928. The Democrats selected Alfred Smith of New York for their presidential candidate. The fatal blow came when the governor campaigned across the state on Smith’s behalf. Smith had announced he was Catholic, and against prohibitionists and “religious bigots.” The Republican candidate, Herbert Hoover, overwhelmingly took the office and the Republican party took several state offices including seats in the Supreme Court, a near majority in the lower House and substantial gains in the Senate. “Democratic Wrath” was heaped on Johnston and he was held responsible for the disaster.

When the legislature met again for its regular session in January 1929 a combination of Republicans and insurgent Democrats set in motion a second impeachment effort. Thirteen charges were presented to the Senate, eleven of which were accepted. Governor Johnston was suspended from office on January 21 and Lieutenant Governor William Holloway became acting governor. Johnston’s impeachment trial began February 6 and lasted 6 weeks. Finally on March 20, the governor’s ordeal ended with the Senate voting to remove him from office on the eleventh charge, that of general incompetency. He was acquitted of all others.

Johnston returned to the Senate serving from 1933 to 1937. He maintained his law practice in Perry until his death on January 7, 1965. He is buried in Perry.