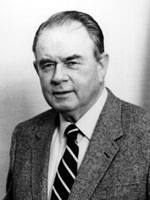 Henry L. Bellmon, Oklahoma’s eighteenth and twenty-third, served as the first Republican governor of the state. He served under unusual circumstances in the he was surrounded by other top elected officials who were Democrats. By rigid economy and use of growth revenue Bellmon assured voters that Oklahoma could operate with a plan to increase spending for education and mental health programs and end deficit financing without raising state taxes.

The son of a Cherokee Strip pioneer, Bellmon was born in Tonkawa, Oklahoma, on September 3, 1921. He graduated from Billings High School, attended Colorado State University, and transferred to Oklahoma State University where he earned a Bachelor of Science degree in Agriculture. Bellmon served in the U.S. Marine Corps from 1942 through 1946, and received the Silver Star for action on Saipan and the Legion of Merit for action on Iwo Jima. He returned to farming in Billings, but developed an interest in politics. Bellmon became a member of the Oklahoma House of Representatives in 1947, but was defeated for re-election in 1948. Bellmon remained active in party affairs, but did not run for office again until his successful campaign for governor in 1962.

Serving from January 14, 1963 to January 9, 1967, Governor Bellmon authorized no general tax increase, yet due to the expanding economy of the state, supported increased spending in many areas. The legislature appropriated considerably more than previous legislatures, such as a 49.9 percent increase for higher education, a 41.6 percent increase for public schools, 22.9 percent for mental health, 15.2 percent for highways, and 50 percent for vocational rehabilitation.

In 1965 the state aid program for public schools was rewritten with the new code returning much of the control of schools to local citizens. A $54,750,000 approved bond issue paid for the largest construction program since statehood for college and university campuses. Teacher retirement benefits increased by 39 percent and classroom student load was reduced. The legislature wrote much of the educational program and the governor accepted most, but vetoed the $1,000 teachers’ raise.

Governor Bellmon would not significantly increase spending since he was tied to his promise of no new taxes. In the November 1964 general election, strong voter opposition defeated four initiative propositions aimed at upgrading public schools. During the same year Oklahoma’s 25,000 teachers unionized. Facing a crisis in education the governor called emergency meetings and revealed his “Giant Stride plan to substantially improve Oklahoma’s educational system.” It focused on a proposed $500,000,000 bond issue to refinance the state’s bond-financed turnpikes, build five new toll roads and provide money for state highways. By taking care of highways through the bond issue, the plan would provide more than $306,000,000 for appropriations. This, according to the governor, would assure teachers an $800 pay increase spread over two years. The Oklahoma Education Association, demanding a $1,000 increase, requested the National Education Association investigate the state’s school situation. The N.E.A. report closed with the indictment that “sub-minimal conditions exist in almost every area of the Oklahoma school program.” Ignoring the “Giant Stride” program, the legislature developed its own. At a special election on April 27, 1965, voters defeated State Question 425 providing for a one-cent increase in the sales tax, and institutional building and highway bond issues. Teachers threatened strikes and walkouts. On May 11 the N.E.A. imposed sanctions on state schools and placed the state on the blacklist. Oklahoma was only the second state to receive condemnation from this national organization. The legislature passed a one-cent increase in the cigarette tax, and despite the governor’s pledge to veto any new tax bill, he signed the measure. This action, plus a higher estimate of general revenue, permitted the legislature to appropriate a record $328,700,000 for the biennium. Oklahoma’s teachers received the largest salary increase in state history.

The legislative reapportionment issue caused another controversy during the Bellmon years. Constitutionally required to reapportion itself after each census, the Oklahoma legislature had neglected to do so. This had assured rural control of the state’s lawmaking and serious under-representation for city residents. The Federal District Court in Oklahoma City noticed widespread inequality in legislative representation and ruled that the existing mal-apportionment was discriminatory. On July 17, 1963, a three-judge federal tribunal announced that the state legislature’s reapportionment plan was “a patchwork of political maneuvering” and reapportioned the legislature by judicial decree. They noted that the legislature was unwilling to reapportion itself with the requirements of the equal protection clause of the Fourteenth Amendment. Rural interests appealed the ruling to the U.S. Supreme Court, but on February 7, 1964, it stayed the order.

Meanwhile the State Supreme Court issued a reapportionment plan. A legislative referendum allocated twelve house members to Oklahoma County and ten to Tulsa County. Each county was assured at least one house member, and none more than one senator. At the May 26 primary election, voters approved the plan and election to the legislature was carried out. Reapportionment attorneys from Oklahoma City went to the U.S. Supreme Court again and on June 15, it ruled that both houses of the legislature must be apportioned on the basis of population. The election was declared void. The governor called a September 29 special election to select the Thirtieth Legislature along guidelines set forth by the Federal District Court on the basis of a forty-eight member senate and ninety-seven member house. Democrats won by substantial majorities.

The Bellmon administration is recognized for several successes. The governor created an Indian Cultural-Industrial Center to provide training and opportunity for Indian citizens. The Human Rights Commission was created to further equal opportunities for Oklahoma citizens. All state agencies adopted the policy of hiring on merit regardless of race, creed, or color. Segregation in privately operated facilities for public use was curtailed and federal civil rights laws were enforced firmly but peacefully.

In highway building, a bi-partisan highway commission was created, which adopted a long range program for building new highways. Five new turnpikes were authorized, completed or financed. Total highways projects awarded during the Bellmon years amounted to an increase of $82,000,000 or 46 percent over the previous administration. The highway maintenance program was increased also.

The state made strides in public safety during the Bellmon administration. A $900 per year salary increase was given to highway patrol troopers, enabling the state to keep and attract employees. In 1966 the Oklahoma Highway Patrol training program was listed in the top 10 percent in the nation by the National Safety Council. The governor made progress in removing politics from the highway patrol, thus raising the morale of the troopers. He increased appropriations for highway safety by 61 percent.

Governor Bellmon promoted new jobs for Oklahomans and improved the economic conditions of the state. Over 250 new or expanded manufacturing plants opened, representing an investment of $137,000,000 and creating more than 17,000 new jobs. A Minimum Wage Law and a Prevailing Wage Law passed to assure workers better wages in many areas. Oklahoma’s unemployment was reduced to the lowest in history, lower than the national average. Per capita income rose $500. The Oklahoma State Employees merit system was strengthened by establishing an employees’ retirement system. Welfare rolls were carefully examined to eliminate cheaters, which increased the amounts payable to eligible persons.

The Governor’s Council on Tourist Development was created to encourage an increase in tourist traffic and spending within the state. A special four-state tourism project was initiated creating the Ozark Frontier Trail.

Two important amendments were added to the state constitution during the Bellmon administration. One required the legislature to meet in regular session annually and limited the sessions to ninety legislative days. The second allowed the governor, secretary of state, state auditor, and state treasurer to succeed themselves in office. The governor was limited to two successive terms.

Bellmon ran for U.S. Senate in 1968, succeeded incumbent Mike Monroney, and served again in 1974; the first Republican in state history to be re-elected to the U.S. Senate. He chose not to run in 1980, but was elected November 4, 1986, to his second term as Governor of Oklahoma, serving from 1987 to 1991. Bellmon was the first governor elected to non-consecutive terms. He resides in Red Rock, Oklahoma.