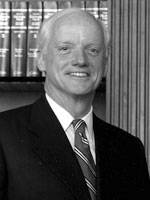 Francis Andrew Keating, Oklahoma’s twenty-fifth governor and the first Republican to win election to two consecutive terms, was born in St. Louis, Missouri, February 10, 1994. Keating’s family moved to Tulsa before he was six months old. He graduated from Cascia Hall High School in 1962, received a Bachelor of Arts degree in history from Georgetown University in 1966 and earned a Juris Doctorate degree from the University of Oklahoma College of Law in 1969. Keating served as a Special Agent of the Federal Bureau of Investigation, serving in west coast field offices in a variety of duties. Keating returned to Tulsa and became an assistant district attorney. From 1972 to 1974, he served in the Oklahoma House of Representatives and from 1974 to 1981, he served in the Oklahoma State Senate and was elected Republican minority leader.

Keating returned to Oklahoma and ran for Governor in 1994. Winning a 17-point victory in a three-way race in the general election, he took office in January, 1995. Keating’s first term was marked by an overwhelming tragedy. On April 19, 1995, a bomb exploded in downtown Oklahoma City destroying the Alfred P. Murrah Federal Building and killing 168 people. Keating’s administration was instrumental in organizing rescue and recovery operations, assuring that those affected by the bombing received prompt assistance. He also created a $6 million fund to provide college scholarships for children who were injured or who lost parents in the bombing.

In state affairs, despite an often hostile Democratic majority in both houses of the Legislature, Keating won passage of a number of significant growth and reform measures, including education reform, environmental protection, tax relief, road building, economic development, public safety, and tougher law enforcement. He led an effort to privatize the state’s teaching hospital system, creating a public-private partnership that assured care for the indigent and a stronger medical education program. Oklahoma’s welfare reform law, passed in 1995, was one of the first of its kind in the nation. By 2001 reductions in the state welfare rolls were reduced by more than 70%. The road-building program supported highway improvement and construction effort with no additional taxes. A special task force appointed by Keating crafted legislation to safely regulate the state’s growing commercial hog and poultry industries and protect the environment. In 1998, Keating tax cut proposals led to a large single-year tax reduction, the first real cut in state income tax rates in 50 years. His tougher parole policies and landmark truth-in- sentencing legislation decreased rising crime rates, which began to fall in the late 1990s. As his first term drew to a close, Keating had presided over a period of broad prosperity and the creation of more than 130,000 new Oklahoma jobs.

In 1998, Keating was re-elected in a landslide. His second term agenda began with significant progress in education, increasing state spending for common, vo-tech and higher education. Keating won passage of a school reform measure that introduced school choice and charter schools to Oklahoma and strengthened the core high school curriculum. In 2000, Keating signed a $3,000 annual teacher pay raise, the largest in state history. Keating also worked successfully to establish a major new higher education resource in Tulsa through cooperative efforts by several state colleges and universities.

During his 1999 inaugural address, Keating established a series of goals for Oklahoma, including reductions in divorce, out-of-wedlock births, substance abuse and child abuse. Keating organized a statewide initiative designed to strengthen marriage, enlisting government, community groups and the faith community. The administration reorganized state agencies concerned with health issues, launching a 2000 cleanup of corruption and legislative patronage at the State Health Department.

Sweeping reform of Oklahoma’s antiquated workers’ compensation system and passage of a Right-to-Work law remained a central focus of Keating’s second term. While lawmakers debated these measures, Keating proceeded with appointments of new workers’ compensation judges and other measures to control soaring workers’ compensation costs. Keating also stood firm against wasteful spending. Through his first seven legislative sessions he had vetoed more than 250 measures, all of which were sustained.

After Republicans made record gains in the House and Senate in the 2000 elections, both houses voted to submit Right-to-Work for a popular vote in the fall of Keating’s six year battle to pass Right-to-Work proved successful as Oklahoma voters approved the measure on September 25, 2001. Keating also won passage of a further reduction in the personal income tax rate and the creation of Oklahoma’s earned income credit system to benefit the poor. In addition, legislative leaders from both parties launched studies designed to completely overhaul Oklahoma’s tax system, including a proposal to eliminate the personal income tax. Also in 2001, Keating signed a major criminal justice reform bill which extended the truth-in-sentencing reforms of previous years to assure that career, violent and repeat offenders would remain in jail. Keating also signed a measure repealing a 31-year-old vehicle inspection law that had outlived its usefulness, successfully pushed for long overdue pay raises for state correctional officers and moved aggressively through an appointed gubernatorial task force to address problems associated with the Tar Creek Superfund site in Ottawa County.

Nationally, Keating served as chairman of the Interstate Oil and Gas Compact Commission, where he became a leading advocate for the creation of a national energy policy. He also served as chairman of the Republican Governors Association, and was mentioned as a potential vice presidential running mate, and later as a possible cabinet member, in the administration of President George W. Bush.

Keating led an effort to restore and refurbish the historic Oklahoma Governor’s Mansion. As the new century began, construction started on a dome for the State Capitol, which is the only one in the nation which had original plans for a dome which were not completed, until 2003. In preparation for Oklahoma’s statehood centennial in 2007, Keating also encouraged public and private development in the vicinity of the Capitol complex to revitalize that area.

Keating served on a National Review Board investigating sex abuse by Roman Catholic priests. He currently travels between Tulsa, Oklahoma, and Washington, D.C. where he serves as President and CEO of the American Council of Life Insurers.