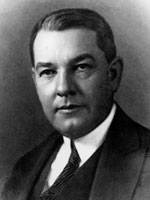 A native of Pittsburgh, Pennsylvania, Marland was born May 8, 1874. He was educated at Park Institute and received his law degree from the University of Michigan in 1893 at age nineteen. He began his law practice at Pittsburgh, but engaged in the oil production business after moving to Oklahoma in 1908. His first big strike occurred on the Miller Brothers’ 101 Ranch, and by 1920, his personal fortune was estimated at $85,000,000. He founded the Marland Oil Company (Continental Oil Company- CONOCO) in 1921 at Ponca City and served as its president. An unfortunate association with the J.P. Morgan interests of New York destroyed Marland’s oil empire, and by 1930 he had lost his wealth. Vengeful toward the eastern “economic royalists,” he became an ardent New Dealer and won election to Congress in 1932, the first Democrat to win in the traditionally Republican Eighth District. Marland was a member of the Seventy-third United States Congress from 1933 to 1935 and served as Governor of Oklahoma from January 15, 1935 to January 9, 1939.

Marland’s “Little New Deal” faced opposition from both the House and Senate, their argument being the reduction of state indebtedness (which stood at $20,000,000 in 1935) on the one hand while increasing state expenditures on the other when revenue was hard to come by. He stressed the need for co-operation with the federal administration,but was only able to succeed in a small portion of New Deal programs for the state. The legislature adopted a homestead exemption from ad valorem tax, an increase in school aid, and an increase in sales tax to two per cent. Sales tax revenues were used to match federal funds to provide old age assistance, and support for dependent children and the handicapped. Marland stated Oklahoma had 150,000 heads of families unemployed and about 800,000 people on relief. Marland asked the Fifteenth Legislature to enact a planning board of fifteen members whose duty it was to prepare and adopt a plan for the conservation, physical development of the state, and a more diversified economy. The legislature created the State Planning and Resources Board. The Board initially provided for a conservation system to create jobs through the WPA (by building dams to prevent floods and to store water, by terracing land to prevent soil erosion, by planting trees to reforest waste land, construction of dams on Oklahoma’s rivers to provide hydroelectric power). The Highway Department took on an expanded road construction program providing thousands of new jobs.

Although the budget was further from being balanced when he began, Marland’s most enduring contributions as governor were providing leadership in the development of the Oklahoma Highway Patrol and the establishment of the Interstate Oil Compact. The Compact of six states was an agreement among oil producing states to practice petroleum conservation and control production to assure a stable oil price. His plan included a commission to direct the compact program and Marland was elected its first president.

Before Marland left office, nearly 90,000 Oklahomans were working on 1,300 WPA projects. Marland returned to Ponca City and began rebuilding the Marland Oil Company. In 1940 he made an unsuccessful bid for the U.S. House of Representatives. He died October 3, 1941 from a heart condition. His civic contributions to Ponca City included the Pioneer Woman Statue. He is buried in Ponca City.