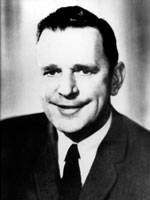 Oklahoma’s nineteenth governor, Dewey Follett Bartlett, served from January 9, 1967 to January 11, 1971. The second Republican Governor of the State of Oklahoma, Bartlett was born in Marietta, Ohio, on March 28, 1919. He was educated in public schools then attended Lawrenceville Preparatory Schools in New Jersey. Bartlett earned a B.S.E. degree in Geological Engineering from Princeton University in 1942. He served in the Marine Corps during World War II as a combat dive-bomber pilot in the south Pacific theater from 1943 into 1945, which earned him the Air Medal. After the war, he moved to Tulsa, Oklahoma, and became farmer, rancher, and oilman as partner in the Keener Oil Company. Bartlett was first elected to the State Senate in 1962 and re-elected in 1964.

A major emphasis of Bartlett’s campaign emphasized increasing industry in Oklahoma. The result of his efforts produced a record $148.4 million in new industries or improvements on existing facilities in 1968. An additional 7,500 plus jobs for Oklahomans were created. Industrial expansion was stimulated by the formation of the Governor’s Full Employment Commission in 1967. Bartlett’s efforts to attract industry also included the creation of a group of “traveling ambassadors” to interest out-of-state firms in relocating to Oklahoma. In 1968 alone, he traveled an estimated 100,000 miles himself and called upon ninety-five of America’s top 500 companies.

Bartlett’s administration applied modern business methods to increase the efficiency of state government. He ordered a management study by a group of business leaders. The committee in late 1967 made 399 recommendations. Of the sixty-two legislative bills the governor proposed as a result of this study, thirty-four passed. During Bartlett’s term court reforms passed, among them the abolishment of the Justice of the Peace Courts, which were abandoned in favor of the Magistrate Court System.

In the field of education, Bartlett proposed a three-hundred dollar pay raise for teachers, but his proposals were not accepted, and a compromise plan for a raise of thirteen-hundred dollars, over a period of three years, as well as a one-year program for teacher retirement was finally approved. This still did not meet full approval from the Oklahoma Education Association, which voted state sanctions for the second time in four years. Regarding higher education, Bartlett supported increases in faculty salaries, resulting in an average annual increase of one-thousand dollars. However, the governor vetoed a bill to make Central State College a university. As governor, he approved legislation which transferred the Division of Vocational Rehabilitation and Visual Services to the offices of the Oklahoma Public Welfare Commission and the Department of Institutions, Social and Rehabilitative Services. A $99.8 million building bond issue, via a cigarette tax, provided for added mental health, educational and medical facilities.

Governor Bartlett took a moderate stand on civil rights. His Full Employment Commission dealt with the problems of employment for the disadvantaged. Although, he introduced no major civil rights legislation, Bartlett directed the preparation of a statewide comprehensive riot-control program as an effective means of assuring peace with the civil rights movement in Oklahoma.

Bartlett and the State Treasurer argued over the placement of state funds into state banks and who had the authority to determine how the funds should be apportioned. This function was previously assumed by the treasurer, however, the governor appointed a State Investment Specialist to guide all funds to provide equality among the banks and receive maximum interest. This controversy erupted into a party fight during the 1969 legislative session with the Democrats supporting the state treasurer and the Republicans supporting the governor. Both houses of the legislature pushed a bill giving the treasurer the authority to handle the deposits without the governor’s interference. The governor vetoed the bill, but the Democratic legislature passed over-rode it.

Another program initiated by Bartlett’s administration was “Pride in Oklahoma.” The governor began a promotional program to revive the word “Okie,” as used when referring to Oklahomans. Two definitions for this word were utilized: “Oklahoma, Key to Industrial Expansion,” and “Oklahoma, Key to Intelligence and Enterprise.” Bartlett also saw success in placing additional employees under the state merit system. Members of the State Bureau of Investigation, the Corporation Commission, and the Department of Education were added. Governor Bartlett sought to achieve national recognition in the Republican Party. As one of the three members of the executive committee of the Republican Governors Conference in 1967, he introduced a resolution calling for uninstructed delegations to the national conventions, which passed unanimously.

In January 1969, Bartlett submitted his budget to the legislature, asking for $228 million; the largest general budget in the state’s history. The 32nd Legislature passed only a few major bills, however. Principally, a new kindergarten bill and an improved teacher retirement program, which did not please the Oklahoma Education Association as the new law provided for increasing the teacher’s contribution from four percent to five percent. A lengthy consumer code passed which set the maximum interest charge at thirty percent. Voters spoke on fifty million dollar industrial development loan bond issue. Sex education became a controversy when an attempt was made to outlaw it in elementary schools and to curtail sex education in the secondary schools. The 33rd Legislature passed a scenic rivers bill; a step toward preserving the environment. It also allocated additional money to education for counseling, textbooks, building maintenance, and special education. A new minimum pay scale was adopted for state employees and a tax reform study initiated. During this session began the bitterness over busing students in order to achieve racial balance in the schools. Additionally, the possibility that student eruptions of unrest on university campus’ might spread to Oklahoma caused the governor and the legislature concern. The speaker-ban statute was expected to keep agitators off the Oklahoma campuses. In 1969 the statute came under attack and a year later the Attorney General declared the statute violated free speech. To thwart civil disorders, Governor Bartlett in 1968 created the Office of Inter-Agency Coordination to collect information on persons suspected of radical tendencies, and to make this information available to state and local law enforcement agencies. The Inter-Agency was attacked as an invasion of privacy and its operation became a campaign issue in the 1970 gubernatorial campaign.

The first state governor constitutionally eligible for a second consecutive term, Bartlett lost his re-election bid to David Hall in one of the closest elections in state history. The vote of the November 1970 general election was so close that Bartlett asked for a recount and called out the National Guard to protect the ballot boxes. However, he lost by 2,190 votes. Bartlett served in the U.S. Senate from 1972 to 1978. He did not seek re-election because of failing health and he died March 1, 1979. He is buried in Tulsa.