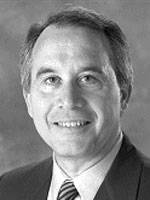 Oklahoma’s twenty-fourth governor, David Lee Walters, was born on November 20, 1951, near Canute, Oklahoma, in Washita County. The son of Harold and Evelyn Walters, he graduated as valedictorian from Canute High School in 1969 and from the University of Oklahoma in 1973, with a Bachelor’s degree in Industrial Engineering. Walters began his career at the university as a management systems and projects administrator. In 1977, he earned a Master of Business Administration from Harvard University. Walters worked as a project manager in the administration of Governor David Boren in 1976.

From 1977 to 1980, he served as assistant and associate provost from 1980 to 1982 of the OU Health Sciences Center where, at age 29, he became the youngest executive officer in the university’s history. In 1982, Walters joined the Burks Group, a commercial real estate company. He served on the Commission for the Oklahoma State Department of Human Services in 1983, later becoming its chair. In addition, he became the president of the American Fidelity Property Company in 1985. Walters was appointed co-chairman of the 100 member Commission on Government Reform in 1984.

On November 6, 1990, Walters was elected Governor of Oklahoma. Running on the Democratic ticket, he carried seventy-five of the state’s seventy-seven counties. Walter’s entered the governor’s office in January 1991. During Walters’ term, education funding increased by approximately 30 percent, and a $350 million bond issue for higher education, the first in 25 years, brought construction and renovation to every state college campus.

While in office, Governor Walters, who faced impeachment, pled guilty to a misdemeanor election violation and eight felony counts were dismissed. The misdemeanor related to encouraging a contributor to give $ 13,500 more than the $ 5,000 campaign contribution limit. Six of the felony counts were perjury charges tied to signing campaign reports. Walters received a one-year deferred sentence, paid a $ 1,000 fine, and gave the state Ethics Commission the money he had raised for the 1994 governor’s race. In 1994, the House voted 52-47 not to hold an impeachment inquiry. Walters served until 1995 and did not campaign for re-election.