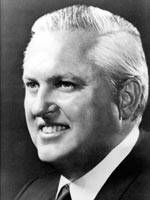 Oklahoma’s twentieth governor, Democrat David Hall, was born on October 20, 1930, in Oklahoma City. The son of William A. “Red” Hall, he graduated Phi Beta Kappa from the University of Oklahoma where he received a Bachelor of Arts degree in Hall served in the U.S. Air Force from 1952 to 1954, and was a captain in the U.S. Air Force Reserve, Judge Advocate General Division. He earned his law degree in 1959 from the University of Tulsa. He served as assistant county attorney of Tulsa County from 1959 to 1962 and as county attorney from 1962 to 1966. Hall made an unsuccessful bid for governor in 1966, receiving strong support in the cities but falling short in the rural areas. He returned to the University of Tulsa in 1968 where he served as professor of law. His 1970 campaign for governor stressed “Let’s Saves Rural Oklahoma.” In the November 1970 general election, Hall upset Republican Governor Dewey Bartlett in a vote so close that Bartlett asked for a recount and called out the National Guard to protect the ballot boxes. The recounted votes showed Hall with 338,338 and Bartlett with 336,157. Hall was inaugurated January 11, 1971, following the closest gubernatorial election in the state’s history.

In his inaugural address, Governor Hall set forth his program for Oklahoma. His first priority was education, which he called the “golden problem solver of the 20th century.” Other issues included improved transportation, agriculture, and individual security as well as enforcing laws on narcotics and pollution control.

Education was Hall’s primary concern. Rising costs, due to national inflation and increasing revenue needs of state operations, were complicated by state income not matching agency needs. Oklahoma ranked forty-fifth among the fifty states in per pupil expenditure. The Governor allocated two-thirds of all new revenue to education and indicated his intention to bring Oklahoma up to regional averages in education spending. One measure signed into law by Hall was House Joint Resolution 1009 changing the name of Central State College at Edmond to Central State University. Under his direction, the legislature approved the Public Kindergarten Law which had been sought by Oklahoma teachers for many years.

Initial controversy in his administration centered on Hall’s tax program. During his campaign he opposed any general tax increases. However, in his legislative proposals Hall asked for $82 million in additional tax revenue. Hall insisted this was not a tax increase but a tax reform. The legislature approved increases in the oil and gas tax, state income tax, and liquor tax, which all together increased state income $43 million. Public schools, higher education, and highways received most of this new revenue.

Hall brought about prison reform in Oklahoma. During his term, a letter from an inmate was smuggled out and published in a newspaper. This letter focused attention on the solitary confinement area in the women’s section of the State Penitentiary at McAlester. The governor’s office took immediate action to rectify many of the substandard conditions. The governor supported the decision not to try sixteen and seventeen year olds as adults on a district attorney’s certification and introduced strong anti-parole policy for drug peddlers. He also established Ouachita Vocational-Technical Training Center, and transformed the Lexington Mental Health Unit into a treatment center for elderly and infirm inmates.

In 1972 Governor Hall introduced “Freeway 77,” the largest road building program in Oklahoma history. It called for $250 million in road bonds to be sold to upgrade Oklahoma highways. Having passed both houses, it was sent to the voters for approval in a special election on March 7, where it was defeated.

Pollution control efforts were placed under one board and a law was passed restricting the sale of dynamite and high explosives. The governor acquired additional money for the district attorney system and started a long uphill fight to update the state merit system. The legislature also passed a reapportionment law to provide more effective representation in state government for the growing towns and cities of the state. Hall also closed the Governor Barlett’s controversial Office of Inter-Agency Coordination, which kept watch on “undesirable elements.” The Governor carried out an intensive industry recruitment program during his term. Dedication of the vast Arkansas River navigation project in 1971 ranked as an outstanding highlight of the early portion of the Hall administration.

Hall was indicted by a federal grand jury three days after leaving office on January 13, 1975 and convicted March 14, 1975. After failed attempts to appeal, he was sentenced to the federal penitentiary in Arizona and served 19 months of a three-year sentence for extortion and conspiracy convictions; violating anti-racketeering statutes while he was the state’s chief executive. The trial marked the first time an Oklahoma governor was convicted of criminal acts committed while in office. Former Governor David Hall currently resides in California.