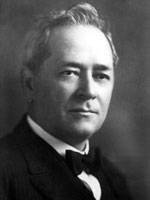 Charles Haskell, Oklahoma’s first Governor, was born on March 13, 1860 near Leipsic, Ohio. A self-taught teacher, he was admitted to the Ohio bar on December 6, 1880 and began practicing law in Ottawa, Ohio. In 1901, Haskell moved to Muskogee, Indian Territory, while promoting a railroad system. He hoped to make Muskogee the “Queen City of the Southwest.”

While in Ohio, Haskell made unsuccessful bids for state senator and for Congress. He finished third in the Democratic primary nomination for governor in 1899. The Sequoyah Movement in Oklahoma, would lead to a convention to draft a second constitution for the proposed state of Sequoyah on August 21, 1905, considered Haskell ready and able. He served as one of five vice-presidents representing the Five Civilized Tribes. While publicly working for a separate state for Indian Territory, Haskell privately believed that defeat of this proposition would ultimately drive Indian leaders to join in statehood with Oklahoma Territory. Although the people of Indian Territory approved the Sequoyah Constitution in a referendum, United States President Theodore Roosevelt declared there could only be one state of Oklahoma. With passage of the Enabling Act in June 1906, a constitution was all that stood between Oklahoma Territory and statehood.

The Constitutional Convention met in Guthrie, Oklahoma Territory on November 20, 1906. As a delegate from Muskogee, Haskell served at the convention’s president. The Guthrie Register reported, “the organization is all in the hands of Indian territory. C. N. Haskell is the power behind the throne.” Haskell authored a report drawing up the county boundaries and made provisions in the constitution, which would lead to prohibition statewide. He also helped put Jim Crow laws into the Constitution and successfully kept women’s suffrage out.

On March 26, 1907, Haskell announced his candidacy for Governor. He was nominated in the Democratic primary and ran his campaign squarely on adoption of the constitution. He was elected to office on September 17 of the same year. Two months later, President Roosevelt signed the Oklahoma Constitution making Oklahoma the forty- sixth state.

Haskell served as Governor of Oklahoma from November 16, 1907 to January 9, 1911. The First Legislature, under his leadership, adopted laws protecting the public from exploitative practices of public utilities, trusts, monopolies and railroads. Haskell also initiated passage of the Depositor’s Guaranty Fund Bill, which insured deposits in case of bank failure. The Governor took steps to enforce prohibition by supporting passage of the Liquor Control Act, popularly known as the Billups Booze Bill. Although the first Legislature passed such progressive legislation as a child labor law, factory inspection law, safety code for mines, health and sanitation codes, and employer’s liability for workers, Haskell sponsored and enacted a Jim Crow Code for Oklahoma.

During the Second Legislature, at the urging of Kate Barnard, the first Commissioner of Charities and Corrections, Governor Haskell directed that Oklahoma prisoners currently confined in the Kansas penitentiary at Lansing be brought back to Oklahoma to construct the state prison at McAlester. This same Legislature, pushed by its Democratic leaders, enacted a “grandfather clause,” which effectively excluded blacks from voting.

During the last two years of his term, Governor Haskell focused his attention on three major efforts: vigorous enforcement of prohibition, effective regulation of railroads and trusts, and relocation of the state capital. Perhaps Haskell’s most dramatic act was personally switching the capital from Guthrie to Oklahoma City the night of June 11, 1910.

Governor Haskell remained active in business ventures and Oklahoma politics until his death on July 5, 1933. He is buried in Green Hill Cemetery in Muskogee. Notwithstanding controversy, conflict and turmoil, Charles Haskell set a standard of constructive leadership and positive action for Oklahoma’s future governors.