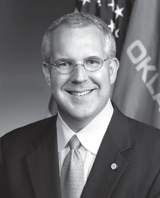 Brad Henry served two four-year terms as governor of Oklahoma. Originally elected in 2002, Governor Henry was re-elected in 2006 by one of the largest margins in state history. A third generation Oklahoman, Governor Henry was born in Shawnee, Oklahoma. He attended public schools and graduated from Shawnee High School. The governor attended the University of Oklahoma as a President’s Leadership Scholar and earned a bachelor’s degree in economics in 1985. In 1988 Henry was awarded his law degree from the University of Oklahoma College of Law, where he served as managing editor of the Law Review.

Governor Henry returned to Shawne to practice law with his father, Charles, and start a family. He married the former Kim Blain, a Shawnee schoolteacher, and the couple has three daughters, Leah, Laynie and Baylee. Before his election as governor, Henry, a Democrat, served ten years in the Oklahoma Senate, chairing the Senate Judiciary Committee and serving as vice chair of the Senate Economic Development Committee. As a gubernatorial candidate in 2002, his campaign themes focused on strengthening education, providing quality health care, and ensuring greater economic opportunities. His refreshing approach connected with voters, and he won the election in November 2002. He was officially sworn in as Oklahoma’s twenty-sixth governor on January 13, 2003.

Governor Henry took office in the midst of a historic budget crisis in state history, but forged a bipartisan agreement among legislative leaders that balanced the budget without raising taxes or making massive cuts in education and health care. During his tenure, Governor Henry has earned a reputation as a common sense consensus builder who brings competing parties to the table to develop solutions for Oklahoma’s challenges. As a result, the governor enjoyed great success in passing major planks of his legislative agenda and moved the state forward.

Henry placed his greatest emphasis on the improvement of public education. His initiatives raised teacher salaries and benefits, put more resources into the classroom and set higher academic standards for students. The governor also expanded Oklahoma’s early childhood education programs, which are rated among the best in the country, and increased funding for college scholarship programs. Keeping college graduates in Oklahoma required high paying jobs, and Henry’s efforts to improve education had been complemented by equally ambitious economic development initiatives. His first term saw the genesis of the Economic Development Creating Excellence, or EDGE, program. The $1 billion EDGE endowment funded research and capitol investment across the state.

These economic development initiatives were coupled with tax cuts, including the largest personal income tax cut in state history and the elimination of the capital gains tax on Oklahoma-based property, to bolster the state’s economy. Governor Henry’s health care successes included the Insure Oklahoma program, a public-private partnership that helps small business provide health care coverage for their employees. He also initiated programs to increase the number of insured children in the state and funded two new state facilities focusing exclusively on cancer and diabetes research.

Under his leadership, the state created the toughest methamphetamine law in the nation, striking a blow to “meth” labs in Oklahoma and becoming a model for the nation. The governor also passed legislation to protect children from online predators and launched a Smart on Crime initiative designed to make greater use of drug courts and substance abuse treatment to reduce repeat offenders.

Despite the demands of office, Governor Henry remained a committed family man. The Henrys have long been active members of the Shawnee community, participating in a number of civic organizations and local causes. They are members of the First Baptist Church of Shawnee, where both served as Sunday school teachers. The governor also served as an ordained deacon at the church.

Governor Henry was elected to his second consecutive term as governor in November 2006. In his inaugural address, he urged citizens to celebrate Oklahoma’s many accomplishments, put aside their differences, and rally together for the good of their beloved state. As he often likes to say, “We are all Oklahomans first.”